The inaugural Dulverton Exmoor Literary Festival took place in Dulverton over the weekend of Saturday 19 and Sunday 20 November 2022.  It was billed as ‘A new Exmoor festival for story-lovers of all ages!”

Listen to this fun podcast with Festival Director, Ali Pegrum, being interviewed all about the festival and the speakers at her farmhouse in Dulverton before the event (with assorted naughty Jack Russells under the table!). Listen here.

Click here to look back at the full Dulverton Exmoor Literary Festival programme for 2022.  There were six hour-long informal talks that took place throughout the day in Dulverton Town Hall on the Sunday, given by bestselling authors and writers on a variety of topics such as politics and drama, rugby, psychology, historical, romantic and crime fiction, food and wine, yoga and writing for children.

Festival-goers were treated to an illuminating talk from Norman Scott discussing his recently-released memoir An Accidental Icon, looking back at his life and his much-documented turbulent relationship with 1970’s Liberal politician Jeremy Thorpe.  Norman was interviewed onstage by journalist Jon McKnight. 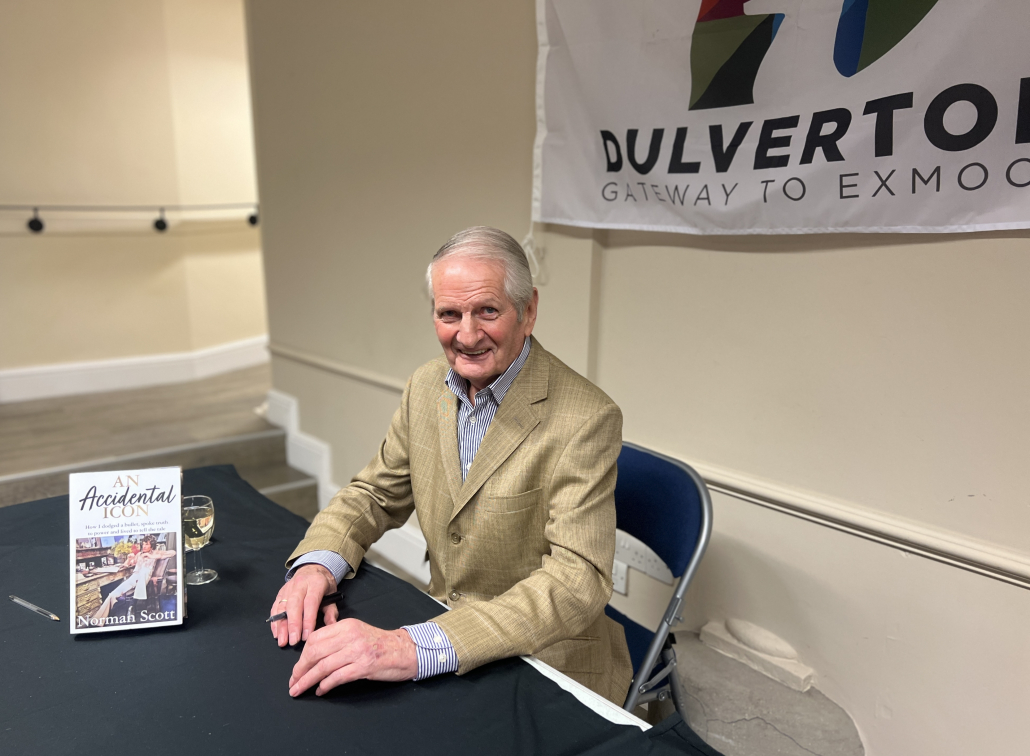 Norman Scott signing copies of his book, An Accidental Icon.

MasterChef judge and restaurant critic William Sitwell, one of Britain’s leading food writers, discussed the history of food, including the problems associated with feeding Britain during WWII – so topical today. 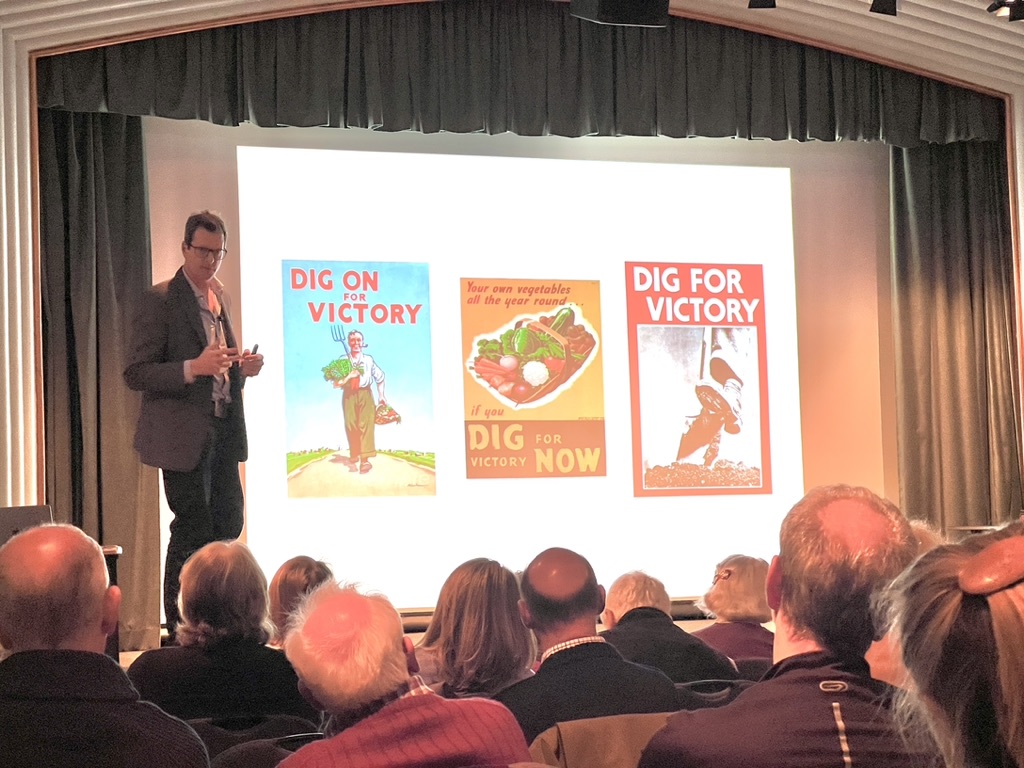 Political journalist and Times columnist Alice Thomson presents the popular interview series podcast Past Imperfect.  At the festival she discussed her accompanying book with travel editor Miranda Taylor – What I Wish I’d Known When I Was Young, a superb illuminating study of famous, successful people and their often hard beginnings in life. 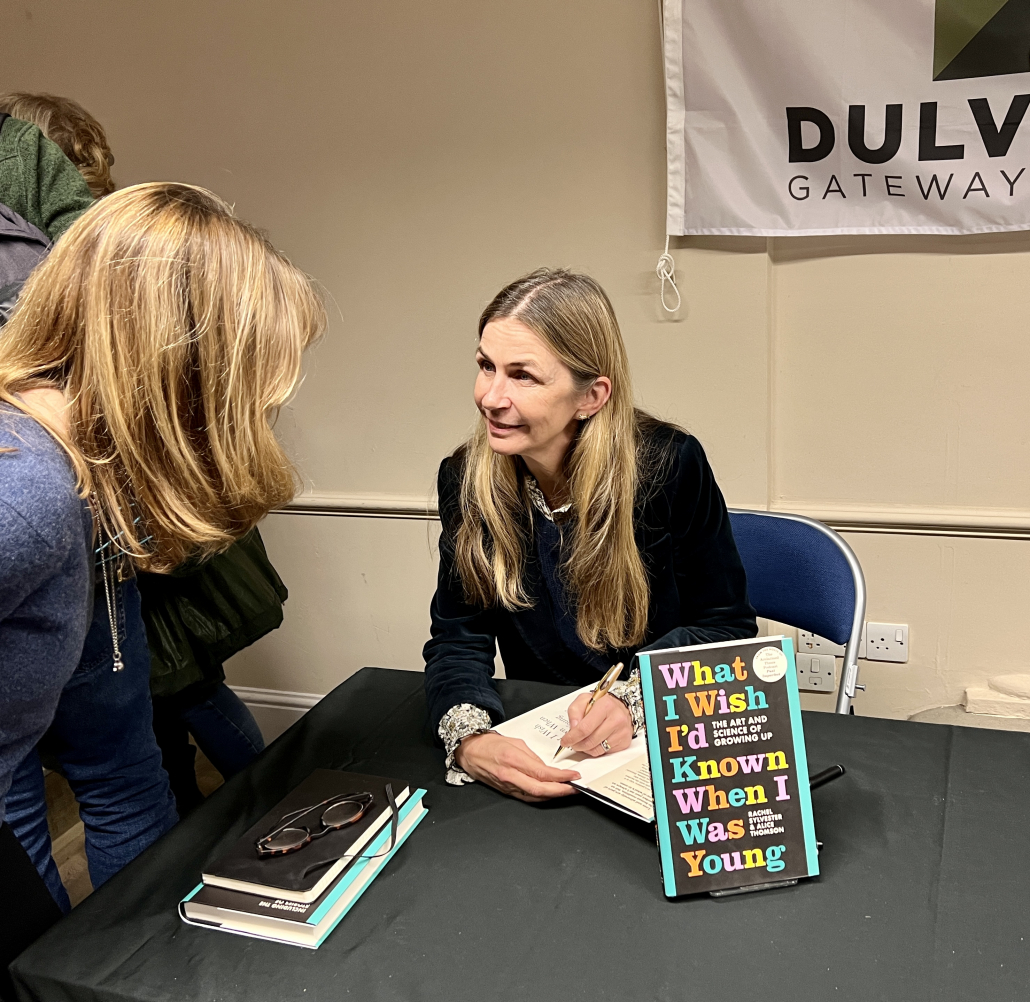 Alice Thomson signing copies of her book, What I Wish I’d Known When I Was Young.

Sunday Times bestselling authors Veronica Henry The Impulse Purchase, Katherine Webb The Disappearance and Dulverton’s own Kate Lord Brown The Perfume Garden chatted together on the stage with Poppy Flaxman, Manager of Waterstones Barnstaple.  They discussed what brings them inspiration and the highs and lows of writing romantic, historical and crime fiction. 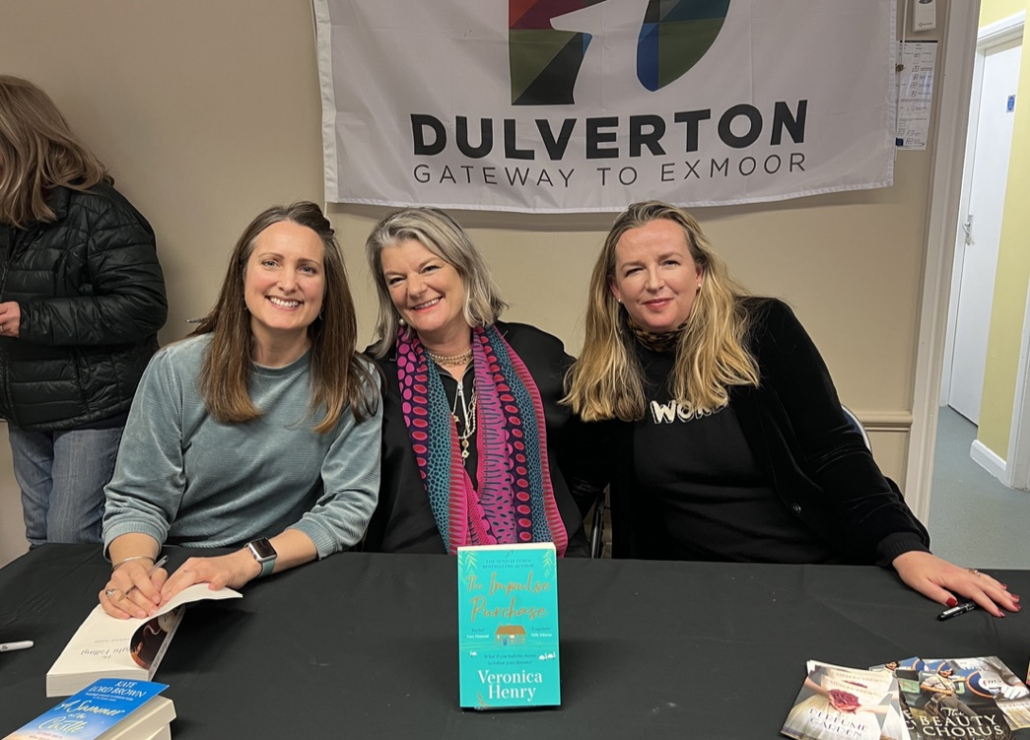 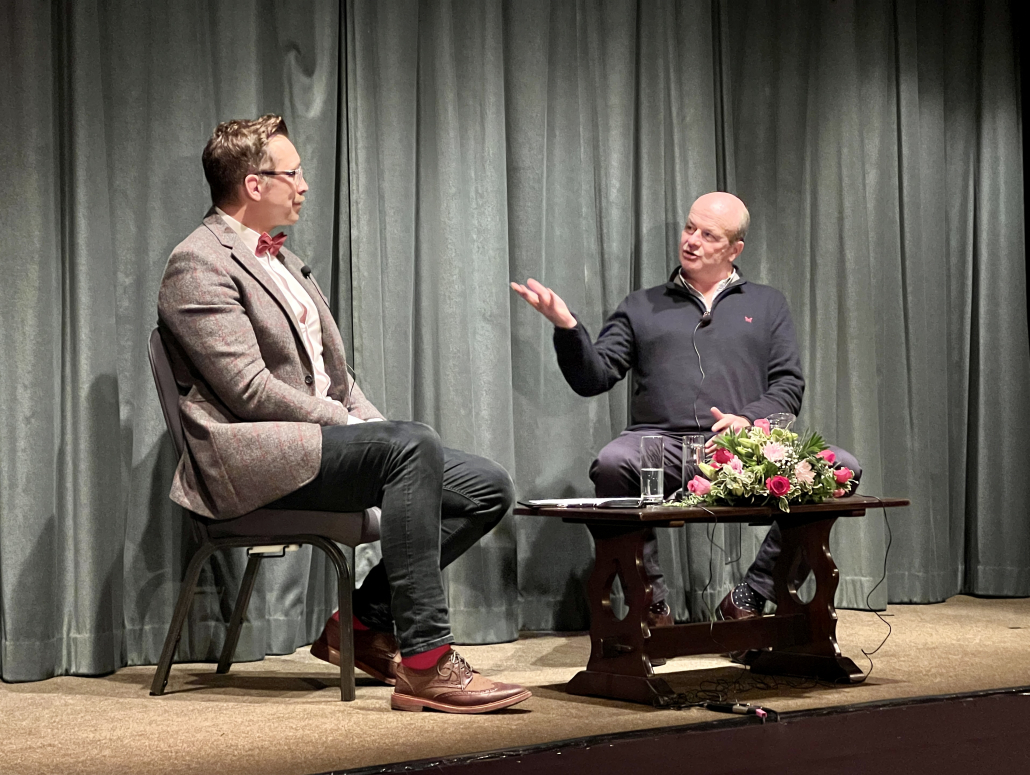 For families, children and animal lovers… award-winning children’s author Claire Barker chatted about her popular books featuring animals, including the much-loved ghost dog Knitbone Pepper. Claire was in conversation with Exmoor farmer and author Victoria Eveleigh who has written several books with horses and ponies as a central theme, including the Katy’s Ponies series.  Annie Brierley from Devon Libraries conducted the informal interview on the stage. 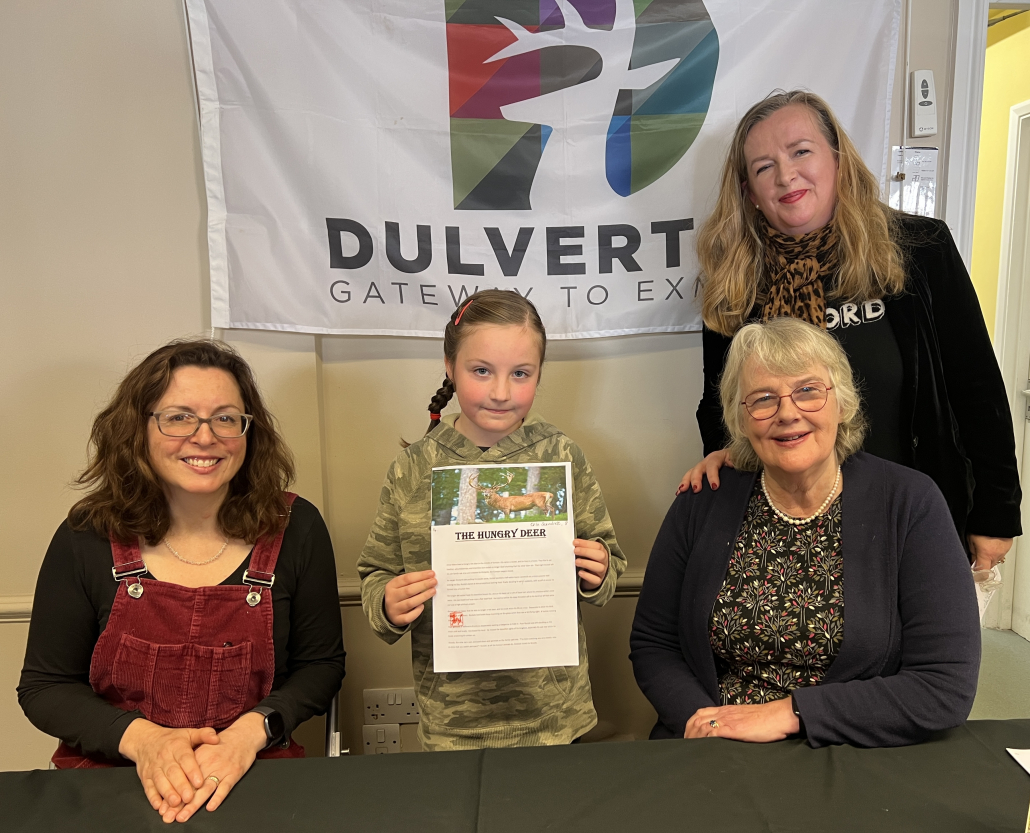 Ali Pegrum, Festival Director, was delighted with how the event had gone and said, “After a long year in the planning, it was wonderful to meet this extraordinary group of writers in Dulverton and bring this new event to Exmoor.  Many complimentary comments have been received from the speakers and the audience, thrilled to have been a part of this inaugural event and hoping it will be repeated in 2023.  I’m sure it will!” 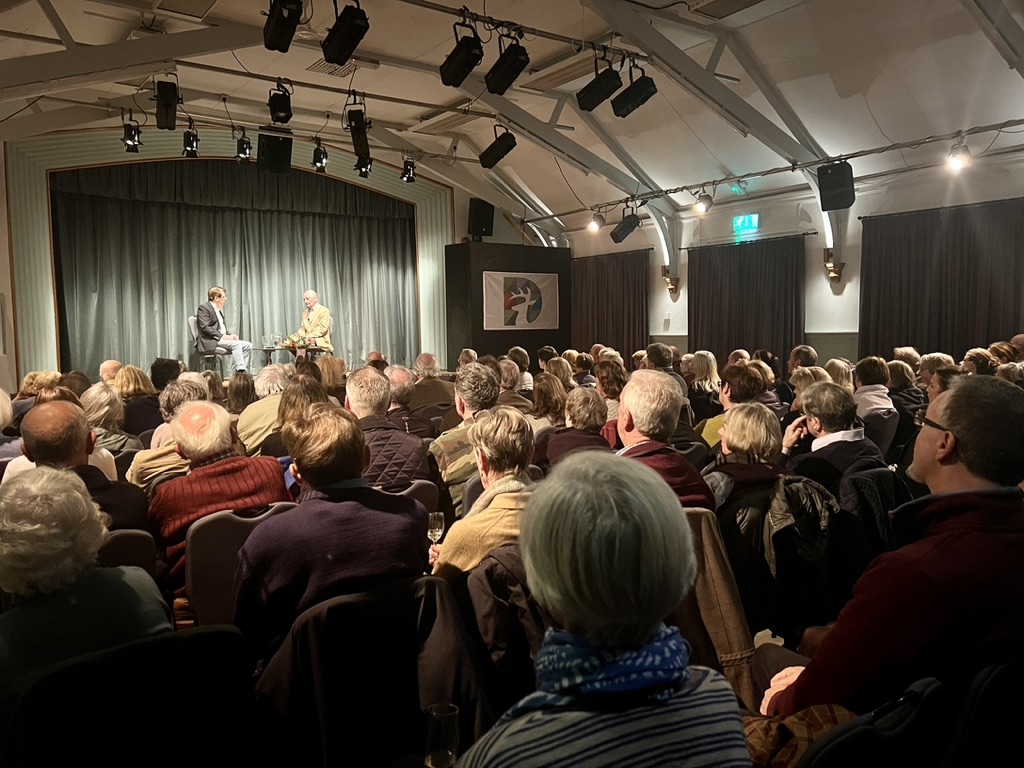 A capacity audience for Norman Scott, interviewed by Jon McKnight.

Author and speaker WS – “Yesterday’s programme was a triumph! Was lovely meeting you and I enjoyed the brownies [in the Green Room].”

Author and speaker RK – “It was an honour to be a small part of your inaugural festival.”

Author and speaker VH – “I just wanted to say a huge thank you for asking me to take part in the first Dulverton Exmoor Literary Festival, and to congratulate you. The atmosphere was so warm and inviting  and the audience – our audience, at least! – were so attentive and interested. And bought so many books, which they don’t always! So hats off to you for a brilliant event, and in particular the outstanding brownies [in the Green Room].  You’ve set the bar high.”

Author and speaker VE – “It was by far the best organised festival I’ve attended as an author.  Your communication beforehand was very reassuring.”

Author and speaker KLB – “Such a pleasure to speak at this event. Congratulations on its success – hope you’ll do it again!”

Author and speaker NS – “I just wanted to thank you and your super helpers for your great kindness to me on Sunday; it was by far the best festival I have been to. So lovely to be back on Exmoor.”

Author and speaker KW – “Thanks so much for the invite! I hope you’ll do it again next year, and I’m sure if you do it’ll just get bigger and better!”

Editor and interviewer MT – “Hooray. Hooray. Think it was a triumph.”

Journalist and interviewer JM – “Dulverton was organised flawlessly with a capacity audience. And the queue to buy copies of the hardback copy of the book spoke volumes (sorry!).”

Sponsor LG – “We never doubted it would be a roaring success and you can most definitely count on our support next year.”

Sponsor VS – “Congratulations on an amazingly successful inaugural event. You have a great venue and set the bar high for next year.”

Audience member SH – “Superbly organised and presented. The Town Hall was perfect and the design, particularly the lighting design, was top notch.”

Audience members A&CB – “Just like to tell you how much we enjoyed both speakers that we listened to yesterday. Both were very different but equally interesting.  We have never been to a literary festival before, thoroughly enjoyed the day and are looking forward to the next one in Dulverton. Very well done; lovely setting, great speakers and first class introductions.”

After Claire Barker and Victoria Eveleigh’s talk, the winner and runners up of the Dulverton Exmoor Literary Festival Writing Competition were announced on stage by the competition’s judge, historical fiction author Kate Lord Brown.  There had been 22 entries from children aged between 5 and 11 from right across the area – Barnstaple, South Molton, South Devon, Dulverton, Bampton, Cutcombe and more.  Prizes of vouchers generously donated by Waterstones Barnstaple were awarded.

Kate judged the winner to be Orla Scandrett, age 8, with her story ‘The Hungry Deer’.  The runners up were Thomas Hill, age 7, and Kirsty Tyrrell, age 10.

The Town Hall bar was open for the day which proved very popular.  Delicious, award winning Wellhayes sparkling wine was made available by the glass. Wellhayes Vineyard is located locally in Clayhanger, Devon.

There was even an opportunity for a brief seated yoga meditation therapy session with Colin Dunsmuir, writer and a leading voice in the global yoga community which was offered free of charge to festival goers at lunchtime. 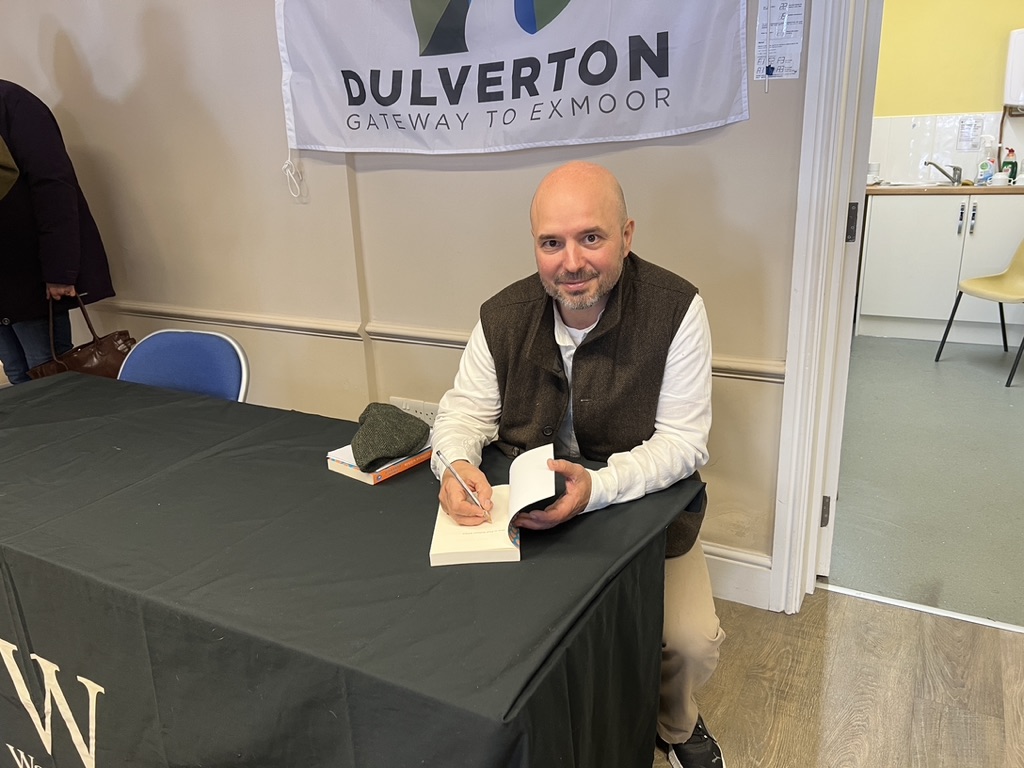 Celebrated yogi, Colin Dunsmuir, signing copies of his book, How To Find Stillness Within.

On the Saturday afternoon, children’s author and illustrator Annabel Collis hosted some exciting creative writing and illustrating workshops in Dulverton Library for families and children aged from 2 to adult. 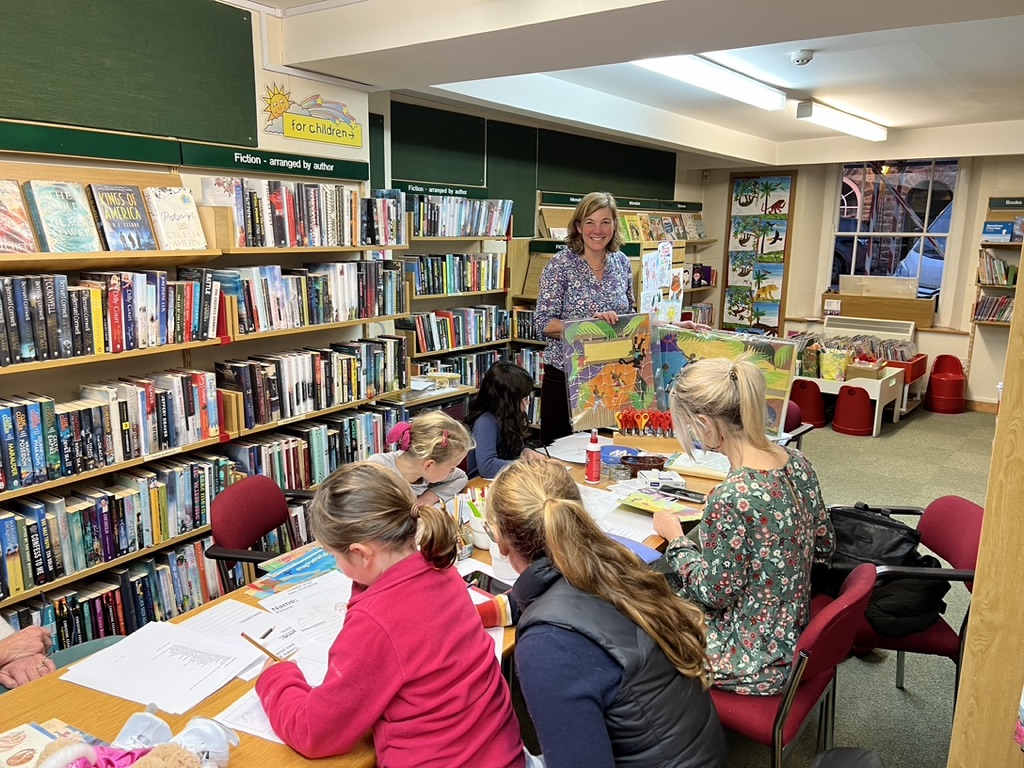